The government of Seoul created a zone for handprints of K-pop stars, including BTS, at its main sports complex.

The Music Star Zone, installed at Seoul Olympic Stadium, also known as Jamsil Olympic Stadium, features handprints of 35 musicians from 12 singers or groups who have performed at the stadium in southern Seoul.

Besides BTS members, full-size handprints of TWICE, Cho Yong-pil, Seo Tai-ji and HOT are displayed at the zone, along with copper plaques that contain their career summaries.

The Seoul government also created seven photo zones at the stadium complex, from which visitors can take pictures of Seoul Olympic Stadium, a statue of Olympic mascot Hodori, a statue of legendary marathoner Son Gi-jeong and other monuments in the background.

The Music Star Zone is expected to provide new attractions to domestic and international visitors. 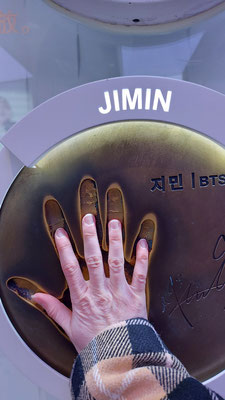 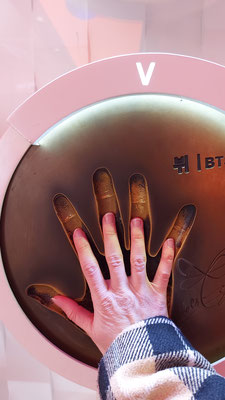 K-pop supergroup BTS' upcoming concerts in Seoul will draw up to 45,000 fans in total to become the largest live music events in South Korea since the start of the pandemic.

The culture ministry has allowed the group to invite 15,000 spectators to each of its three in-person concerts set to be held at a nearly 70,000-capacity outdoor stadium next month.

It will be the largest number of spectators to attend a music concert in South Korea since the pandemic began in early 2020.

The septet will throw the "Permission To Dance On Stage - Seoul" shows at Jamsil Olympic Stadium in southern Seoul on March 10 and March 12-13. It will be the group's first concerts to a live audience in South Korea in about two and a half years. The last time the band performed live in Korea was for the BTS World Tour "Love Yourself: Speak Yourself" concerts at the same venue in October 2019.

For fans who are unable to attend the shows in person, the March 10 and 13 shows will also be streamed live online, while the March 12 concert will be available at theaters across the world for "live viewing" events.

South Korea began allowing in-person concerts from November 2021 under the "living with COVID-19" policies. Currently, music concerts are capped at 50 percent capacity or 4,000 spectators for indoor facilities to provide some physical distancing. All spectators are required to show proof of vaccination or recent negative test results while organizers should place a sufficient number of safety management workers. Still, the number 15,000 is just 22.9 percent of the 65,599 seats at the stadium.

They approved the concerts on the condition that the number of safety management workers should be 5 percent of the number of spectators, a ministry official said, adding that the ministry will send officials to the site to check if the safety and distancing measures are well observed.